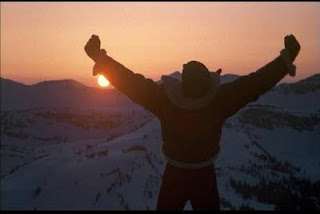 Fall is peak season.  Fall is race season.  Race as much as you want.  There are a few exceptions to this rule, but for the most part it's time to push yourself more frequently, as done in racing.  There needs to be a consistent mental approach to your race selection, based primarily on how you've structured your training and what you've selected as your peak race.  From September through November I usually say "go for it" 9 times out of 10.  All of your Rocky IV training runs through the snow back in February were motivated by peak race season, so it's time to soak it up.
One key element to your fall race selection (and race selection in general) is to not use a race as a "training run".  Treat races as more meaningful and push harder, like you're supposed to, or scratch the race and train on your own that day or with your regular group.  Make the habit of race day having special meaning and a time to test your limits.  For example, a Half marathon leading into your peak/planned marathon is an awesome race to boost fitness if you race it, and I'd expect you to race/run hard that day.  When runners say they're "just going to run it as a training run," it rarely happens…race mode kicks in and because the mental approach and preparation was lacking in the preceding days and/or on race morning, a non-focused race is completed and it gets reported to me as an "unsuccessful training run".  So if you're considering a race as a training run, try again.  Race it hard or do a regular weekend run. This does not mean you have to PR every race, but the specific intensity of that particular race distance should not be lacking.
The closer we get to peak season, the fitter we are and the harder we can race, in turn, the more fit we become from racing hard.  It's a vicious cycle that ideally/ theoretically leads to confidence.  I agree with Mark Allen in that races should be a special day and the whole idea of race day is to race ("Go Like Hell")!  A true peak performance only comes at the end of a full training cycle.  Allen once told Chris McCormack, whom he helped coach to his first Ironman World Championship, "Chris, the reason you're not winning that race is because you're trying to be in peak shape 52 weeks a year, and that just can't happen."  Allen said, "In short, it is just not possible to have high race frequency and peak racing performances." This is why tapering is important in addition to embracing off-season goals and a phase of de-conditioning.  Does this contradict the fact I promote fall as race season and want everyone to race as much as possible in October?  No.  The difference is in the length of these races, how we define "frequent," the length of your peak race, and how fit you are.  So, there is such a thing as racing too much if it conflicts with training (usually in the true summer months).
So, fall is around the corner.  Make sure your race schedule makes sense to you, or at least make sure you are signed up for enough races.  Talk to your run coach and ask which races are right for you.
Train (and race) hard!
Mike
Posted by Mike at 8/23/2011